We’re looking for YOU!

We are seeking a diverse group of individuals, from all walks of life, with different levels of experience.

We are the right size, the right fit, and the right place to start a career or move up the ladder.

How do I begin my career?

Whether you’re someone with no experience, or you’re a law enforcement veteran, the process is simple.

1
Complete the Application and provide a Cover Letter, along with your Resume
2
Upon being selected to proceed, attend our orientation session which includes a written test
3
Candidates who pass the written test will be invited to participate in an oral interview with various members of the O’Fallon Police Department.
4
A select number of the above candidates will be invited to a final interview with the Board of Fire and Police Commissioners and the Chief of Police
5
Prior to being offered a conditional offer of employment, the candidate will have to undergo a thorough background examination

What you need to participate

Education info – Candidates must have the following:

The above education requirements may be waived under the following circumstances:

Training after Appointment as an O’Fallon Police Officer 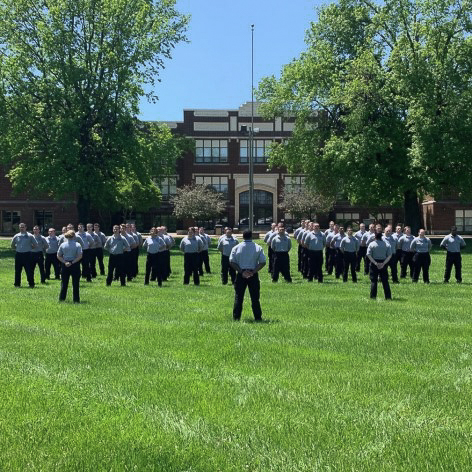 Individuals who are not a certified Illinois police officer, or who have not attended a recognized out-of-state police academy, will be enrolled at the Southwestern Illinois College Police Academy, located in Belleville, Illinois.  The academy consists of a 16-week (640 hour) curriculum which includes all aspects of entry level law enforcement training to include strengthening good foundations of ethics, examining legal issues, citizen interaction, community oriented policing, investigative skills, firearms training and defensive tactics.  Officers attending the academy will reside in dormitories located at the academy during the course of the program.  Hardship exemptions for academy residency are available at the discretion of the Chief of Police and academy administration.

Individuals attending the police academy will be required to successfully complete the Police Officer Wellness Evaluation Report (P.O.W.E.R) Test, a physical fitness examination, to be accepted at the academy.

Learn more about the P.O.W.E.R Test

All officers, whether after successful completion of the police academy, or having received a waiver by the Illinois Law Enforcement Training and Standards Board (previously certified police officers), will undergo an Orientation Phase and Field Training Program.

During orientation, officer will become familiar with the department, its processes, benefits, and computer systems used within the course of their duties.  Officers who previously attended an out-of-state police academy, will also complete the Abbreviated Mandatory Firearms Course as well as an Illinois Law for Police Course.

Following orientation, officers will begin a 14-week Field Training Program.  The program is designed to incorporate the skills gained in the police academy, or from a previous department, and implement them in a real-world environment under the supervision of a cadre of certified Field Training Officers.

“The honest enforcement of the law is vital to the ultimate well-being of our great republic.”
President Theodore Roosevelt

“Police work is one of the more noble and selfless occupations in society. Making a difference in the quality of life is an opportunity policing provides – and few other professions can offer.”

International Association of Chiefs of Police

“No one is compelled to chose the profession of Police Officer; but having chosen it, everyone is obligated to perform its duties and live up to the high standards of its requirements.” Need more info on why O’Fallon is the department for you? Fill out the information below to download a PDF, which includes information on salaries, health insurance, and our retirement pension.

Ready to wear the badge?